I’m really excited to be premiering some excerpts from an excellent new book by fellow Carina author Amy Bird. Amy’s new book is called Hide and Seek and I’m sure it will be as excellent as her last two! Plus there’s a brilliant competition to win £200 worth of Eurostar vouchers! Just check out the image at the bottom!

Don’t you just love that cover? Here’s the blub:

Here’s what Amy has to say about writing Hide and Seek:

There are many different types of secrets, and many ways to conceal them. Some secrets lurk in objects, or family artefacts, hidden away if they have an obvious meaning, or they can be waiting in plain sight to reveal their hidden truth. There may be secrets that one person knows about another’s past. Or secrets about the future and what you plan to do. Or secrets from yourself, locked away in your own mind. Inter-marital secrets, that breed silence, mistrust, and duplicity.

All these are present in Hide and Seek.  Will, the protagonist, has a lifetime of secrets being kept from him by his family. By his wife. And then he starts making his own secrets. These secrets go to the heart of Will’s identity. As an author, my challenge was how to tackle them. One writing tutor once taught me an exercise: write a scene, then re-write it as though the main character has a secret. The impact is immediate. Suddenly, you have intrigue, suspense, mystery, and motivation – does the character want to hide this secret? If so, from whom? And why? How has it affected their life so far? How will it affect their future? The trick, though, is to do this without being annoying. In the same way as no-one in the playground likes the kid who dances around saying ‘I’ve got a secret and I’m not going to tell you,’ no-one likes a book that does that either. Deliberately delaying reveals is not the way forward. Instead, characters must learn at their own pace, the plot must unfold in a way that keep should you guessing, but not necessarily knowing what you are guessing about.

In Hide and Seek, I wasn’t content with just one character behaving as if they have a secret. The book is split between three voices: Will, Ellie, and Sophie. You’ll find out how they relate to each other when you read it. They all have secrets from the world and from each other. And other people have them too. As the novel escalates, the level of danger attached to those secrets heightens. Some will do anything to keep the secrets safe, other will fight to have the truth revealed. Sometimes the reader knows what those secrets are. Sometimes they don’t.

So just what are those secrets? Well I’m afraid…it’s a secret. For now. But if you read Hide and Seek, all will be revealed. In the end. 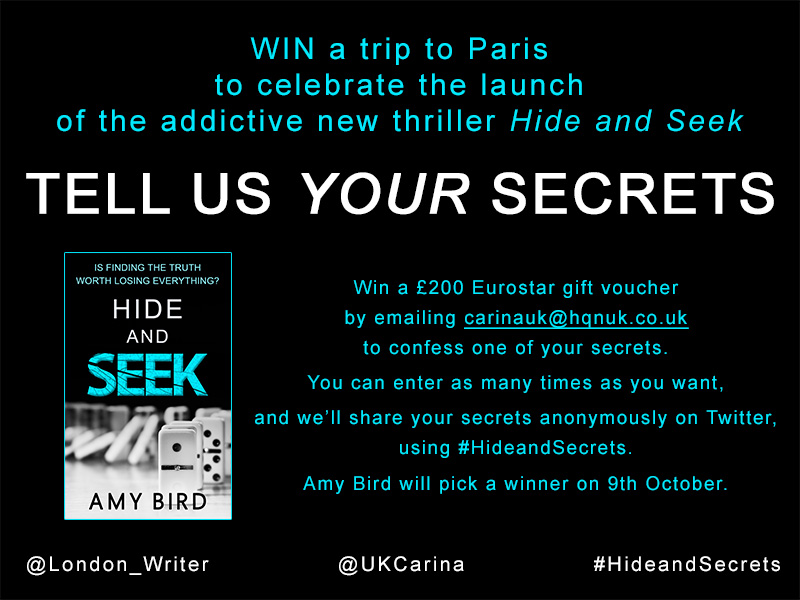 Amy is the author of the thrillers Three Steps Behind You and Yours Is Mine, and now Hide and Seek.

Having moved all over the UK as a child, she now lives in North London with her husband, dividing her time between working part-time as a lawyer and writing.

Keep Up with the rest of the blog tour for more excerpts and interviews!

Incase it wasn’t clear how excited I am that my first Carina UK novel is coming out this month, let me express that clearly. EEEEEEP!

The Last Word is available for review on Netgalley, if you follow THIS link. Let me know what you think, and be sure to tweet at @almichael_ and @carinauk

Tabby Riley’s online life was a roaring success. Her blog had hundreds of followers, and legions of young fans ardently awaited her every Tweet. Her real life was a bit more of a disappointment. Living in a shared flat in North London, scratching a living writing magazine articles on ‘How To Please Your Man in Bed’ wasn’t where she thought she’d be at twenty-six – especially when there was a serious lack of action in her own bedroom.

Until she was offered the job of her dreams on online paper The Type – and gained a sexy new editor, Harry Shulman, to bounce her ideas off. Tabby had previous bad form when it came to falling for well-dressed, smooth-talking editors, so no way was she going there again…ever! But had she got a little too used to hiding behind her laptop screen? Perhaps it was time for the real Tabby Riley to come out and have some fun!

You can also pre-order on Amazon HERE